Free Yourself from Other People’s “Poop”

Although the holiday season has come to an end, there is one type of gift that will continue to be given all year long. An icky, sticky gift that is given on the energetic level. Wrapped in pretty paper and tied with a shiny ribbon, the gift can sometimes appear authentic. But when we tune into how we feel, we know there is something awry. Like a chewed-up and spat-out wad of gum that lands in our gut, undigested and foreign, it’s obvious that something doesn’t feel right. In our home with our young daughters, I refer to this as the gift of poop.

Whether we are aware of it or not, we often project our unresolved shit onto others. We fling, spray and hurl our crap at others. We project onto our kids, our spouse, our co-workers, our mother and our friends. A desperate attempt to not look at our own stuff. A futile attempt to feel better…even just for a fleeting moment.

Allow me to share an example of projection in a work setting. A friend was participating in a training call with a company that she had recently joined. The business had been experiencing some marketing challenges, which had been brought to the surface by a handful of the company’s distributors. On the training call, the company’s founder painted a rosy picture of himself taking ownership of these issues. But sandwiched between the niceties, was one yucky comment that splattered the phone audience with goo. On an energetic level, the company’s owner had thrown sticky slime at my friend and the other trainees.

Rather than taking ownership, he projected his feeling of inadequacy onto his team, leaving them with the icky feeling that the company’s marketing challenges were their fault. In other words, he was not the problem…they were the problem. And as long as he projected his crap onto others, he wouldn’t be able to genuinely take ownership of the company’s challenges, nor would he be able to heal his buried feeling of inadequacy.

Projecting our stored emotions and fears onto others mucks up our relationships. It keeps us aligned with our ego, our fear-based false self. It keeps us stuck in denial, flailing around in our unresolved emotional swampland. Projecting onto others keeps our hearts closed and our defenses up. And as long as we are in denial with our hearts closed and defenses up, it’s difficult to tap into our own authenticity. As long as we are tossing our crap at others, we cannot heal and grow.

As parents, we often project our stored emotions or fears onto our kids. In a recent meditation, I saw that I had projected some unresolved stuff onto my seven-year old daughter. This energy was squishing her, as if she was clamped between the tight prongs of an oversized rake. With eyes closed, I received an image of myself as a seven-year old, slumped over crying. I felt lonely, scared and sad. I realized that I had projected these stored emotions from my childhood onto my daughter. By energetically taking back my own stuff, I freed my daughter and offered myself the opportunity to heal.

Interestingly, the night before this meditation, my daughter burst out crying. An articulate child who normally easily expresses her emotions, she told me that she felt sad, but also felt some other emotions that she couldn’t describe or make sense of. Projecting my stored childhood emotions onto my daughter had confused and emotionally overwhelmed her.

As parents, we often have good intentions for our children. But sometimes our good intentions are rooted in fear. When we project fear-based energy onto our kids, they can feel this controlling energy wrapped tightly around them. In an attempt to break free of this restrictive energy, our children may act out, talk back or rebel.

As grown adults, we sometimes continue to carry projected energy from childhood with us. One example that comes to mind is a driven 30-year old woman who grew up always being the “good girl”. Although she had determinedly followed her dreams of being an international competing athlete in a sport that was traditionally for males, she had to fight hard for the right to do so due to her cultural background and strict upbringing. When I tuned into her energy, I saw that she was carrying an old, dark cloud of energy that her father had projected onto her. A controlling and unsupportive dark cloud, brimming with beliefs about what his daughter should and should not do.

Not long after this beautiful woman released this outdated dark cloud, an interesting thing happened. She began shedding all the ways she had been playing the role of “good”, including “good wife”, “good daughter” and “good woman” (according to her culture’s dictates). Being good had often meant keeping her mouth shut, being dependable and loyal and silencing her heart’s whispers and wishes. Being good had meant not allowing her true self to fully shine. When she began shedding these old roles like a snake sheds its old skin, this inspiring woman began stepping more and more into her light and connecting with her soul’s true purpose.

Projection can also occur between other family members. My client, a vibrant and driven 40-something year old woman, complained of low energy and fatigue. When I tuned into her energy, I saw that a dark, snake-like energy was slithering around her system. The energy felt like misery and negativity. When I looked more closely, it became apparent that this energy belonged to her adult siblings. For the past year, my client had been focused on raising her vibration through meditation, yoga and intuitive healing sessions. Her siblings, who are stuck in an old, familiar and heavy feeling of misery and negativity, are not happy for their younger sister’s expansion and growth. Unwilling to look at and heal their own stored emotional stuff, they united in their misery and projected their negative energy onto their sibling. My client was able to release this energy and hand it back to its rightful owners. Her fatigue disappeared and she became her vibrant self again.

Like a neglected tree dripping with over-ripe fruit, marriage can be loaded with projection. Allow me to share a story about a couple who have been married for several decades. To the regular eye, the marriage appeared harmonious. But on a subtle energetic level, the marriage dynamic felt very different. The wife had spent her entire adulthood avoiding and hiding from her inner emotional jungle. Because of her fear of facing her emotional baggage, she wound up projecting some of this fear onto her husband. This controlling energy felt like a tight, suffocating rope cinched around his torso. For the well-being and health of all — husband, wife and marriage — it was important for this suffocating energy to be released from the man’s system and handed back to its rightful owner.

When we carry other people’s emotional crap for them, we aren’t able to genuinely support them. Instead, it’s important to hand back other people’s stuff so that they may have the opportunity to heal it. Health and happiness come from facing and healing our stored emotions, debilitating beliefs and fears. 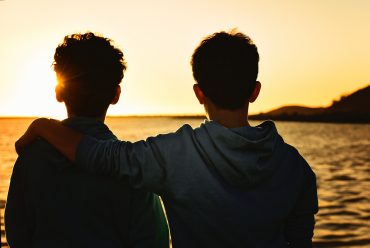 How to Tap into your Innate Awesomeness